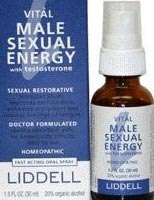 The effect of testosterone is based mainly in the development or manifestation of the primary male sex organs in puberty. Also affected are secondary sexual characteristics such as beard growth and muscle mass. It also controls the production of sperm. Testosterone participates in the blood and helps with education gewebeaufbauend. Not least, it has effects in the brain, so be certain moods and behaviors influence under his control. These include notably the sexual arousal (libido). Testosterone is in competitive because of his muscle power and increase their impact

With increasing age, the testosterone levels and especially the free, unbound testosterone in the blood, however. This hormonal change is in line with the menopause (menopause) of the woman called andropause and can decrease the values of Nanomol to under ten so-called testosterone deficiency

With increasing age, the proportion of testosterone due to illness and biological processes in the blood continuously. This decreased testosterone levels probably leads to a series of complaints, which are also under the term "male menopause" together. These include changes in the muscle and power, anemia, changes in sexual behavior and a decrease in bone density (osteoporosis).

The diagnosis of testosterone deficiency can result in complaints in connection with simple blood tests may be made. It is important that the various symptoms of those affected will be investigated in detail to distinguish it from other potential trigger diseases confusion. In general, testosterone deficient a normal appearance of age and therefore requires no treatment. However, it is possible to balance the testosterone hormone deficit to take

Testosterone belongs to the group of androgens and is in the testes. It is in the blood in different forms. A large proportion of androgens is so-called transport proteins. This ensures an optimal transportation of the testicles to his action. The transport proteins are considered SHBP (sex hormone-binding proteins) called. Hormonbindende certain proteins (proteins) testosterone protect against a rapid reduction and to regulate its biological activities. Can be Active testosterone only in its unbound form.

VITAL Male Sexual Energy is a combination of remedies carefully to alleviate immediate symptoms and to work on a deeper level, helping to strengthen the sexual energy, desire and vitality.
# Arnica montana (Leopard’s Bane) - acts like a muscle-tonic and increases sexual desire.
Caladium # seguinum (American Arum) - For weak erections during the commotion, impotence, and difficulty in achieving orgasm.
# Carduus marianus (St Mary’s Thistle) - For the feeling of depression, forgetfulness and apathy.
# Damiana (Turnera Aphrodisiaca) - For fear and sexual impotence.
# Galium aparine (Goose Grass) - for a healthy function of the bladder and a good protector against abnormal cell growth.
# Hepar (liver extract) - Promotes the healthy function of the liver, and the synthesis of IGF-I, an important anti-aging co-factor.
# Korean ginseng (Aralia Quinquefolia) - Provides a joyous sense of strength and stimulates the genitals.
# Lactuca virosa (spicy salad) - For transport and impotence.
# Nuphar corpus luteum (European Lily Pond) - For increasing sexual desire and the improvement of erections. As a general aphrodisiac.
# Orchitinum (testis extract) - Treats impotence, and promotes increased sexual vitality.
# Phosphoricum acidum (phosphoric acid) - For a lack of sexual desire and treats pain in the testicles.
# Pituitarum (pituitary extract) - For hormonal balance, sterility and sexual weakness.
# Populus tremuloides (Aspen Poplar) - For discomfort of the bladder, urethra and prostate.
# Supra Renal substance (Adrenal Extract) - For sterility, sexual weakness, and supports the secretion of DHEA.
# Testosterone - for the increase in muscle strength and sexual appetite.
# Thymus extract - For sexual desire.
# Thyroidinum (thyroid extract) - Supports sexual appetite, promotes increased strength, and treats feelings of restlessness.
# Thuja occidentalis (Tree of Life) - For sexual lethargy and treats discomfort in the male sex organs.

Dosage: For adults only. Spray twice under the tongue three times per day.